Scroll down for info.

When you're done, push Back. 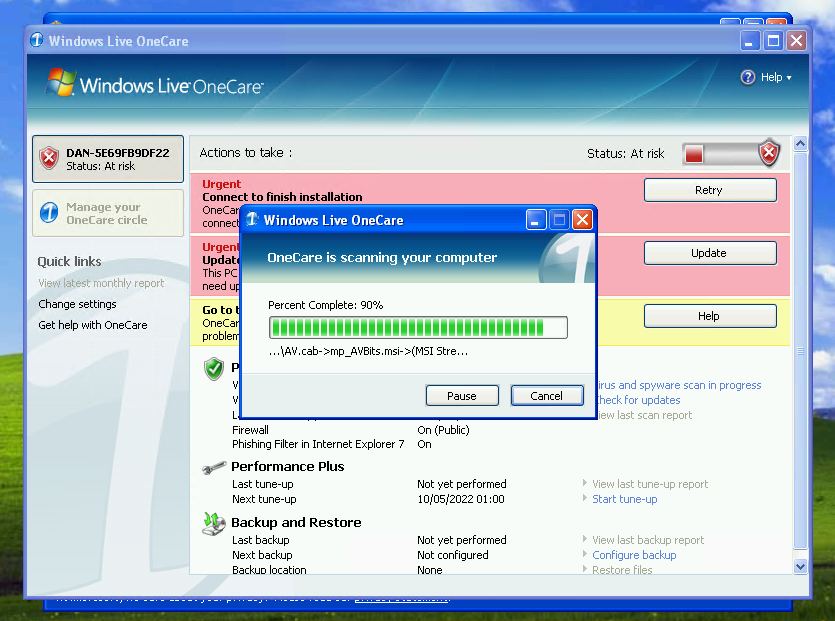 Windows XP support is still in a closed-beta stage.

OneCare for XP has been a much more challenging task. It's highlighted some very interesting points too.

For those who don't know, there's 2 editions of the Windows Live OneCare Disc. The one that MJD featured on his channel (Version 2.0) and a slighly newer version, Version 2.5. To the untrained eye, these look identical if you were able to install it back in the day.

So what are the differences?

Ok, this is where it gets a little complex. OneCare has a package called IDCRL, a core part of the OneCare Service that handles everything.

On 2.0 versions of the disc, the installer file for IDCRL REQUIRES Service Pack 2, won't work if you have SP1, SP3 or uSP4. I tried and tried to get this to work but sadly it does not.

There is however, two workarounds, one a bit sketchy, the other not so much.

The quick workaround is to just use a 2.5 disc. I've finalised the installer for this and in a future release it will install. This however can be a bit temperamental and sometimes claims the antivirus isn't working properly.

The slightly more sketchy option is to have the installer copy IDCRL from a 2.5 disc, and use it during a 2.0 installation. This DOES work...sort of. As you can see from the screenshot on the left, it'll eventually trip a crash if you try to scan your PC for viruses, or a specific file.

The rest of the software works as expected.

Hopefully this hasn't put your hopes down. If you really want to install it, it can be done by extracting all the cab files into c:\onecare, then executing boinc.bat from the OneCare installer. Make sure you use a 2.5 disc though. If you use a 2.0, it'll break unless you replace IDCRL.cab with one from a 2.5 disc.